On Friday and Saturday, June 24 & 25, 2016, the Intendence Film Festival (IFF) will be screening films from Colorado and the rest of the world at the Open Media Foundation’s (OMF) Denver Open Media Facilities, 700 Kalamath St, Denver, CO 80204. The festival will include a red carpet opening night gathering plus post-screening Q&A sessions both evenings. These will be live-broadcast via cable and Internet web streaming from OMF’s television studio facilities. The fabulous Miss Elizabeth Rose will be performing both evenings at the after-party from 10 pm to midnight. The Awards Brunch is scheduled for Sunday, June 26, from 11 am to 1 pm. About IFF IFF is a community-focused experience held in late June at OMF in the heart of Denver’s Santa Fe Arts District. Our absolute desire is to engender a festive atmosphere where both filmmakers and the film viewing public can connect, communicate, and have a remarkable time. As actors and filmmakers who have chosen to live in Colorado, we are inspired to highlight the extraordinary skills of local writers, producers, filmmakers, and artistic talent while attracting first-rate storytellers from all over the world. The very best of their film submissions are selected by a team of experienced judges and screened during the Festival. This is our seventh annual film festival, our fourth year as IFF, and our third year at OMF. 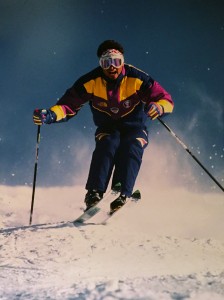 Breaking news… Day glow is not dead! Want proof? Join a bunch of passionate winter sports aficionados for a triple header of tasty mountain loving movies for “Totally 80’s Mammoth”.
First up is “Multi Glisse, Sharing The Stoke”, a short film about all types of sliding down a snowy mountain. Skiing, snowboarding, backcountry touring, telemarking or whatever gets you stoked! Also featured is the classic Greg Stump ski movie: P-Tex, Lies and Duct Tape.

We will wrap it up with MountainFilm In Telluride entry, “Falling into Place.” This is a true comeback story of Danielle Lancelot Watson who was paralyzed in a rock climbing accident. Our cameras document her journey from the hospital bed all the way to the majestic peaks of Moab Utah.
And if that is not enough, we’re hosting an 80’s day glow fashion contest and a raffle full of amazing 80’s snow sports memorabilia! All raffle proceeds go directly to Disabled Sports Eastern Sierra. We hope see you on Saturday, March 26th at 6:55PM
Mammoth Lakes Arts Center Theater, 549 Old Mammoth Road, Mammoth Lakes, CA.
And thanks, For ‪#‎SharingTheStoke‬

Thanks to Our Gear Sponsor